Thanks go out to all who have helped out so far, you've all earned your places of honor on the thanks list! 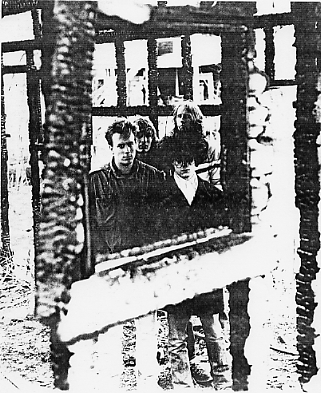 As we reported last year, Cows and Beer has been remastered and reissued as the definative version in April 2014. Limited to 1000 copies each of the 5 different coloured 7" version (red, blue, green, gold and clear vinyl), and the now sold-out 12" with comic book, you can still get your hands on the 7", but hurry, they're going fast!

Needless to say, you need this!

-
The Downloads section is back!
Thanks to the power of Dropbox, there are now some active links in the Downloads section for all you cool cats to dig.
I'm continuing to stick voraciously with the .FLAC file format, any problems, we'll help you out, but "don't say please" to mp3's, as I'm sorry to say they're the "f*ckups" of the audio world.
-
DIE KREUZEN REUNION INTERVIEW:
Milwaukee Journal Sentinel conducted a set of interviews with the band before and after the show played on May 26th at Turner Hall in Milwaukee. There's also some soundcheck and live footage, along with a glipse of the guys rehearsing with unsung hero Dan Hanke on drums...
-
diekreuzen.com lives!!!
Die Kreuzen Official Site
Finally, there is a true, official, day-to-day Die Kreuzen site!
Dealing with things as and when they happen, and allowing Counting Cracks to perform it's function as an archive, our big-sister site, created and maintained by Martin Defatte is the place to go for the more recent goings on regarding the band. There you'll find some excellent links to the various interviews and articles conducted and written in the build-up and aftermath of Lest We Forget, along with a ton of great pics from the night, a discography etc., along with some neat links and other cool stuff.
Go there!
Die Kreuzen Official Site

A site like this can only go so far without input from others!

If you have any Die Kreuzen stuff that isn't listed here, please get in touch.

Anything is of interest, not just live shows, but flyers, photographs, articles, interviews,

even your own anecdotes...

This is NOT the Die Kreuzen 'Bible'...

As accurate as the information here tries to be, there will always be something not quite right.

If you have any corrections, shout up!

Suggestions and constructive criticism can be emailed to me directly, (see bottom of page)

or use the Guestbook. In fact, why not pop along and say "Hi!" anyway!

I'm a trader too!

This site doubles as my audio/video trading site. I traded tapes through the post in the late 1980's, up to the mid-1990's. I then retired, but was lured back by the power of the internet, and it's ability to make the trading world a much smaller, more accessible world.

The trading is a completely separate entity to the Die Kreuzen. Unless you want to trade some Die Kreuzen!

Nothing on the trade list is available for sale under any circumstances.

email: (don't forget to omit the blanks, they're there to annoy the damn spybots!)